There are a couple relatively common fungal diseases that affect spruce trees, especially Colorado Blue Spruce, which, when planted here is outside of its native range.

Probably the most common problem affecting spruce trees is a fungal disease known as Rhizosphaera Needle Cast. This disease can affect most species of spruce, but is especially problematic on Colorado Blue Spruce.

Symptoms of Rhizosphaera Needle Cast typically start to appear in late winter or early spring with needles turning brown or purplish brown. Around mid-summer, infected needles begin to drop from the tree. 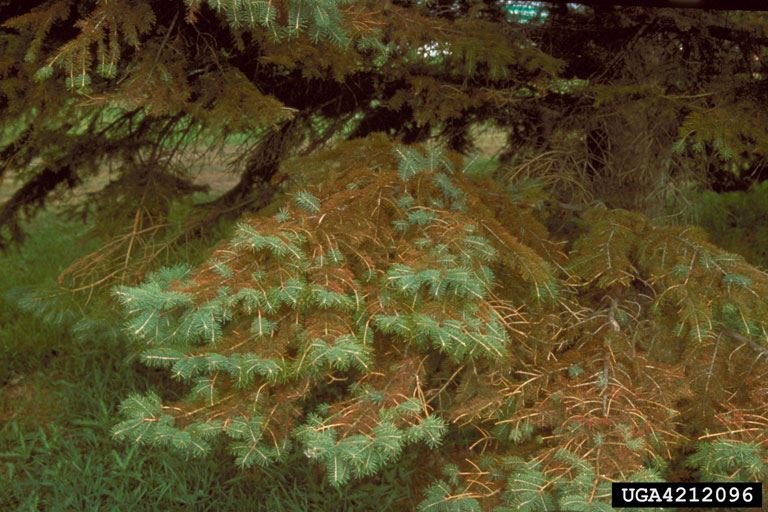 Generally, the tips of the branches remain green and unaffected. With the aid of a hand lens, tiny black dots can often been seen on the infected needles (these are fruiting structures of the fungus). The symptoms typically begin on the lower, inner portions of branches, where humidity levels normally are higher. The fungal spores are moved around by splashing water (either from rain drops or irrigation).

Trees that are stressed from drought, insects or other factors are more susceptible to Rhizosphaera Needle Cast. While this fungus will not usually kill a tree, severe infestations can leave a tree thin and unattractive. Management options that can be implemented include cultural practices such as watering during periods of drought (do not let the water splash down on the needles), mulching around the base of the tree (don’t pile mulch against the trunk of the tree) and providing ample space between trees to ensure good airflow. A fungicide could also be applied in the spring to protect needles. Two applications would be necessary. Make sure to follow label directions if utilizing a fungicide.

Cytospora Canker is another fungal disease that affects multiple spruce species, but is most common on Colorado Blue Spruce trees that are at least 10 years old. This is another opportunistic pathogen, meaning that it is more problematic for trees that are stressed due to drought, insects or other factors.

Symptoms are somewhat similar to Rhizosphaera Needle Cast, typically beginning in the lower branches of a tree. A sunken canker forms on an infected branch and eventually will girdle and kill that branch, which causes the needles to turn brown and drop off. The cankers often will be covered with a white or bluish white resin, a characteristic symptom of Cytospora Canker. The fungus typically will not enter the trunk of the tree and thus, it rarely will kill an entire tree but will leave it thin and unattractive. The spores of this fungus can be transported by wind or splashing water (both rain and irrigation).

Management options that can be implemented include cultural practices such as watering during periods of drought (do not let the water splash down on the needles), mulching around the base of the tree (don’t pile mulch against the trunk of the tree) and planting either Norway or White Spruce, both of which are less susceptible than Colorado Blue Spruce. Infected branches can also be pruned and destroyed during dry weather.